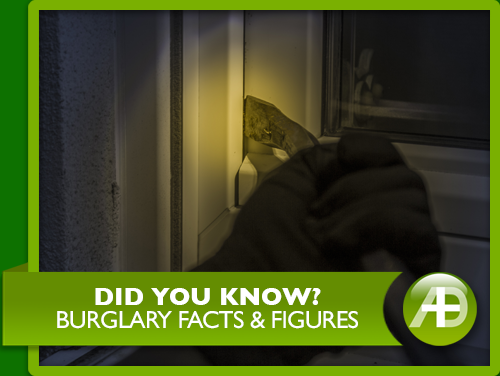 What is “burglary,” exactly? 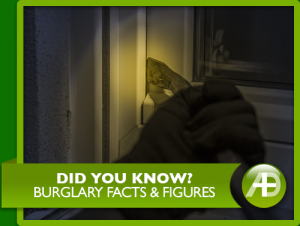 We all have a general idea of what “burglary” is, but we’re starting off our “did you knows” with a bang; did you know that the legal definition for “burglary” varies from state to state?

According to a publication released by the Australian Institute of Criminology (click here to view it), the resounding definition across Australia, however, is “…any offence involving unlawfully entering a house or other building to steal property, usually at night; the statutory offence of entering a building as a trespasser (or without consent of the owner) with the intent to steal anything in the building or (depending on the jurisdiction to commit some other offence in the building) (Butt 2004: 58).”

It’s interesting to note that a “burglar” doesn’t necessarily have to steal anything from your property for the crime to be classified as a “burglary!”

How do burglars know which properties to target?

Did you know that the majority of burglaries that take place are unplanned?

There are a wide variety of characteristics a particular property could display that would trigger a burglar’s instinct to investigate, but some key findings from a study carried out for AIC’s DUMA (Drug Use Monitoring in Australia) program, where detainees suspected of burglary, breaking and entering, robberies and trespassing were interviewed and questioned, were as follows:

The consequences of being burgled:

Aside from the fact that you’d probably have had a few things stolen from your home or offices, there are a number of other negative effects that burglaries can and do have on people, as described below by Adam Tomison, Director General at WA Department of the Attorney General:

“The social costs of the intrusion into private homes can significantly impact the psychological health, wellbeing and perceived safety of victims and the wider community.

Statistics indicate that individuals are more likely to be the victim of theft or burglary within their homes than any other type of crime.

Break and enter crimes are one of the most common and far reaching forms of criminality in Australia.

In approximately 20 percent of burglary cases, the psychological trauma experienced is extensive due to the violation of, and intrusion into, the victim’s private territory, particularly for women who reside alone.

Victims report a new sense of vulnerability as the burglary violates their perception of personal security.

In addition, significant distress can result from the loss of sentimental and irreplaceable items.”

How long would you assume a burglar takes to go through your things while you’re not home? Of the detainees the study interviewed;

What happens to your stuff?

Did you know that 12.3% of burglaries don’t involve stealing anything?

What’s the best way to deter a burglar?

While we are an alarm installation, repair and maintenance company, we do have to admit that there is one thing that trumps even the most advanced of home and commercial alarm systems…

Did you know that dogs are statistically more likely to prevent burglaries than any other reasonable form of security?

Participants of the same study were asked to indicate what aspects of a property made it less attractive to burgle, some of the key findings of which revealed that;

Did you know that you may be eligible for a discount on your property’s insurance premiums by having a working alarm system installed?

As recommended by the same AIC paper, and as much as we would love to train up the most adorable and highly effective guard dogs, fully functional alarm systems remain one of the greatest deterrents to potential burglars, but note the caveat!:

“Another significant deterrent was the presence of home alarms; however, there was a caveat. Information indicates that this is effective only when home alarm systems are turned on. The sample of active burglars were aware of fake alarm systems, fake security systems and fake cameras, none of which deterred them. Rather, they presented a further indication of a property with minimal security. Insurance companies also acknowledge the increase in deterrence that active alarm systems provide, offering discounted premiums to those who have them installed.

Effective security measures were described as switched on alarms, security screens, roller shutters and dogs. Therefore, the more secure a property, the harder it is to break in and the longer it takes to get in deters active burglars from pursuing the break and enter of particular premises. This may provide an incentive for government funding and home builders to include security measures when building new houses; that are, ‘secured by design’.”

If you know that your alarm system doesn’t work properly, is out-dated or is simply set-up as a fake, in the hopes of deterring burglars, then it might be time to consider an upgrade.

Alarm Doctor has been serving New South Wales homes and businesses for close to two decades, providing flawless workmanship over our installations and repairs and coupling those high standards with a genuine dedication to customer satisfaction.

Call us on 1300 23 00 23 to book an appointment today and remember, liking us on Facebook will earn you a discount on all Alarm Doctor callouts (for a limited time only)!