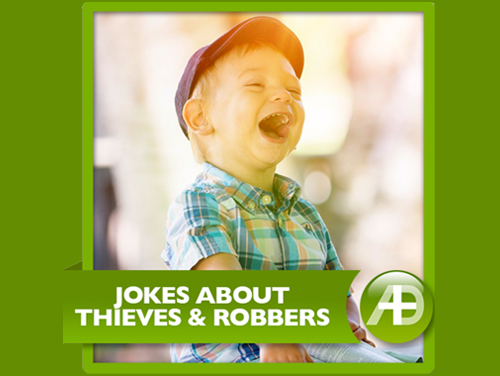 Let’s Have a Laugh at Their Expense… For Once

It’s surprisingly difficult these days to find a good joke about robbers and thieves… but perhaps the idea of being burgled or robbed is just so off-putting that nobody every thinks to turn the situation from a real negative to a potential positive.

We don’t blame them.

With that being said however, thankfully there are some witty folks out there who’d like nothing more than to poke fun at some of the most intrusive people in our society and here are our top picks of some of the best ones.

Please note that we have re-written jokes and stories that may previously have been badly worded, but otherwise we have done our best to keep them as original as possible. Unfortunately, our sources didn’t credit the original authors, so we can’t tell you who came up with these beauties. Nonetheless, here they are for you to enjoy!

Freddy had his credit card stolen late last year. He decided not to report it stolen because the thief was spending less every month than his wife did.

A thief broke into a medium-sized suburban home, looking for anything he could find to throw into his bag and flog. He went from closet to closet and room to room before eventually finding the main bedroom. There, he immediately rushed to the where he thought the jewels were kept. Then, from nowhere, a voice said quietly:

“Jesus is watching you.”

The burglar stopped, shocked at what he’d just heard. Following a moment’s silence as he listened, he continued, thinking nothing of it.

“Jesus is watching you.” The voice said again, this time louder.

The thief whipped around, eyes darting all over the room.

“Oh, thank the heavens… it’s just a parrot!” The thief sighed in relief. “What’s your name?”

Shaking his head, the thief continued his search, throwing Rolexes and pearl earrings into his backpack;

“The same idiot who called their Rottweiler Jesus.”

Thief #1: “Hurry up, man! Now’s not the time for superstitions!”

Police have arrested a man charged for a series of raids in which he allegedly disguised himself as large parcels and had himself posted to businesses across the country.

The 39-year-old male worked with an accomplice, who would deliver him as “the parcel” to unsuspecting companies just as their business days came to an end, leaving the Trojan Horse of a package unattended in their offices over night.

Police said that he would then slip out of the package, make his rounds stealing whatever he could, and then seal himself and the stolen goods back into another box, pre-labelled with his home address.

The ploy fell through however, after the man’s accomplice (the delivery driver) decided to turn both himself and his partner into the police due to “professional disagreements.”

Police busted a 19-year-old male after he’d managed to break into an unsuspecting woman’s home while she was away on a week-long holiday.

Investigators presume that the young man gained entry through the woman’s unlocked bedroom window, before swooping inside and lifting three pieces of diamond jewellery worth approximately $5,500 AUD.

The police were alerted to a potential break-in as soon as the women returned home, after finding that her window, her jewellery boxes and, strangely enough, an unknown Facebook account were all left open for her to see.

On closer inspection, the person that had signed in was a mutual friend of the victim and one of her colleagues, whom it turned out was also involved in the burglary; working in cahoots with the thief to plan the best approach to take.

The Facebook sign-in came as a result of the young man not knowing where to look for the jewels, and so logged on to ask his accomplice for more information via Facebook Messenger, considering she’d been in the victim’s house as a friend only a few weeks earlier.

Warning: this joke contains adult humour that some readers may find disturbing..

Two blondes decide to change their lives and rob a bank together. The first blonde, called Chelsea, thinks over and plans the entire robbery, going over every aspect with her associate, the second blonde; Ruby.

Happy with their plan, the next day they set off and the robbery begins.

Chelsea drives quietly up to the bank’s entrance, stops the car and confirms with Ruby, “Are you 100% sure that you understand the plan? You need to be in and out of the bank in less than three minutes, with all the cash. Please say you understand?”

“I understand – I got this,” repliedRuby.

Ruby gets out the car and goes in the bank while Chelseastays behind in the getaway car. One minute passes.

Seven minutes pass, and now Chelsea is really stressing out.

Finally, the bank doors burst open! And out comes Ruby.

She’s wrapped rope around the bank’s biggest safe and is dragging it with every ounce of strength to the car. She manages to get it to the trunk before the bank’s doors burst open again.

The bank’s security guard, red in the face, comes hurtling out with his pants around his ankles, and gun at the ready.

Ruby finishes loading the safe and jumps in before the two ladies blister off into the sunset.

“You are such a blonde! You said you understood the plan!” Chelsea shouted angrily.

“I did! I did exactly what you told me to do!” Replied Ruby.

“No, you moron,” snapped Chelsea. “I said tie up the GUARD and blow the SAFE!”
We hope you’re enjoying your week and remember, if you don’t want to become the subject of one of these jokes, your best bet is to ensure that your home, offices or place of business is properly protected, whether you’ll be sleeping there or not.

We’ll be able to provide you with fast, efficient and cost-effective installation, maintenance, upgrade and repair services at a time and place that suits you, anywhere in New South Wales.

Thanks, and we look forward to working with you!